Under the masthead title, Chalkboard Models and Other Insights, the chapter, Pull * Transition * Push * Rest, Nature’s Ubiquitous Sequence, taught us a universally important sequence of actions, PTPR for short.  This sequence, which pertains to all dynamical systems, fits into the Pragmatic Schematic (PS):

The three actions Pull * Transition * Push are displayed within the two circles of the Pragmatic Schematic above, while outside and beyond the PS is a Rest.

On the other hand, after a Pull and before a Push, comes a Transition.  In this Transition the direction of air flow reverses, from the Pull of air into the mouth and down into the diaphragm, to the Push of air up from the diaphragm and out through the mouth. 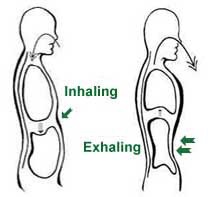 We do not breathe out the same air we just breathed in (what would be the point of that?).  Between the inhalation of oxygen rich air and the exhalation of carbon dioxide rich air there must be a point at which an exchange of gasses occurs.

In normal respiration, the Transition that achieves a change of direction and an exchange of gas is so fleeting as to be nearly imperceptible.

The Pragmatic Schematic (PS) below represents graphically only the initial pendulum swing, arcing from left (alpha) to right (omega).

The omega ball, having exhausted all the acquired acceleration, naturally wants to return to its own Rest position, the lowest, center-most position possible.  This final ball will also free fall.  As the mass of the ball accelerates, this time in the opposite direction, it arcs from right to left.

The omega ball Transitions the re-acquired acceleration through the three central balls and into the alpha ball, which will be Pushed from its Rest position, rather than being Pulled from it, as it was initially.  This process will repeat, back and forth, until all the energy of acceleration is gradually depleted by the resistance of air pressure.

Before the video began the balls were at Rest, mingled in, stationary in their lowest energy state.  When the alpha ball was singled out, it entered into a feedback with a complementary omega ball.  They continually fed each other with the excess energy of acceleration until thoroughly depleted, at which time the balls reclaimed their Rest status.

A good example is found in signal transmission via nerve cells.  A signal is Pulled by dendrites, Transitioned in the cell body and Pushed by the axon.  This P-T-P is contained within the neuron, in its inside-space.  Beyond the nerve cell, in the synaptic gap, its electrical pulse does not exist.  The electrical aspect of the nervous signal is at Rest.

To cross this synaptic gap and engage nearby neurons, the signal is carried over by chemical molecules that reside in the outside-space of the nerve cells.  The signal propagates through the interstitial medium thanks to neurotransmitters.  Neurotransmission by chemicals Transmits a signal across the neuron’s Rest.

Clearly, the nervous system includes, but transcends, its individual neurons.  The nerve cells alone, without the aid of chemical transmitters, cannot propagate their signals.

Only the left-most ball was Pulled from its Rest position closest to Earth’s surface.  When this ball was released it Transitioned, moving downward and rightward in an arc, until its force impacted the next ball in line.

What passed through the middle balls and into the final ball?  Although force equals the acceleration times the mass of the ball (F = ma), the ball keeps its mass and transmits only the acceleration.

The omega ball did not have another ball to which it could pass the acceleration; so it expended the acceleration by climbing upward against increasing downward pressure.  The ball slows by 9.81 m/s² until halting at the omega point of the arc after expending the full load of acceleration.

After the acceleration was released, what happened?  The ball was attracted back to its position of Rest.  Ironically, in its falling there the ball regained acceleration.  As this omega ball hit the next ball in succession, the acceleration was transferred again through the interim balls and into the alpha ball, far left.

The initial event, which occurred left to right, happens in reverse, from right to left, with one exception: there is no need for an additional outside influence to initiate the return half of the cycle.

In reverse, the omega ball falls while moving backwards and the alpha ball climbs while returning to the alpha position.  Together, the combined movements retrace the same arc, shortened minutely by the loss of energy due to friction, or air resistance.

The return swing will not reach the full summit of where the force initially raised the alpha ball.  The resistance of field pressures in the air will continually reduce the number of arc degrees in each half cycle until all of the acceleration initially given to the closed system is depleted.

The pendulum is a closed system.  A closed system is subject to disorganization (entropy) as initial resources are steadily expended.

Open systems acquire sufficient resources to continuously maintain the strength of its cycles.  Magnets are used to sustain movements of large display pendulums, such as the Foucault’s Pendulum in the Science Museum of Richmond, VA, which demonstrates, to the delight of children, that earth is actually rotating.

Acknowledging the obvious fact that the leftmost alpha ball begins with a Pull, and the rightmost omega ball ends with a Push, we are reminded of what happens at the two poles of a magnet.

When we pause to recognize that both the alpha ball and the omega ball actually perform all three actions, Pull * Transition* Push, we can compare the alpha and omega balls to to connected magnets.

From outward appearances there is no effectual difference between a single magnet and conjoined half-sized magnets.

An example of magnets is given in The Ins and Outs of Yin and Yang.

In Quadernity, we understand the coupled systems act together as a Female and Male.  Below compare color-coded magnets with a color-coded sine-wave. 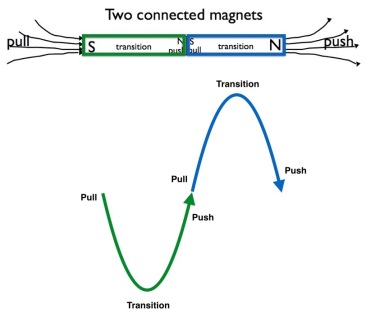 Compare diagram of an open system (left below) which continually renews its resources, with diagram of a closed system, (right below) which gradually runs down the initiating energetic influence.  The two halves of the cycle, each consisting of Pulls * Transitions * Pushes (PTPs) are shown in green and blue.

Remember from the chalkboard model of Quadernity, the dashed arrows indicate a return to the Rest state, which happens after expending/releasing/Pushing excess energy.  The pendulum balls stay at Rest until energy of acceleration is again transmitted into them.

The two semicircular arcs are halves of a full cycle/circuit/circle.  The arcs have been shifted to show their opposing directions on opposite sides of an axis.

The closed system (right above) correlates to the (non-magnetized) pendulum behavior.  The return half of the cycle (in blue) is rotated on the axis to be seen above the first half of the cycle (in green).  Within a full cycle/circle of a closed system (see above, sine-wave graphic on right) the direction alternates, left-to-right and right-to-left.

In the PS model of Quadernity below, an exchange occurs as the Female Push is met with the Male Pull.  The Female OUTput becomes the Male‘s INput during this Transition between opposite movements/forces.  In the graphic below we see the Female‘s Push and the Male‘s Pull are both situated in the Transition of the overall arc, and their respective Transitions are now labeled in the crescents. 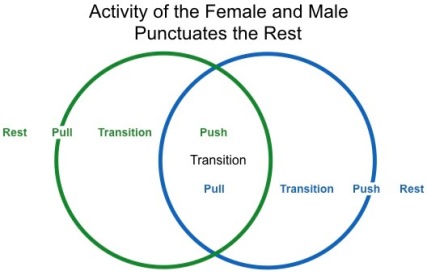 The first half of every arc PTPs from up to down (shown in green), then the second half PTPs from down to up (shown in blue).  Both halves of the first arc move from left to right across the PS.

This is followed by the second arc moving backward from right to left across the PS.  Two full arcs take us full circle/cycle.

The back and forth transmission of acceleration produces an alternation between PTPs and Rests, effectively conjoining the closed system of pendulum balls with the relatively open system that repeatedly renews acceleration.

At the root of spatio-temporal Particularities (particular ities), however small or large, however simple or complex, we find recursive cycles of BeComing, the Coming-to-Be.  Relatively closed systems need to couple with relatively open systems in order to renew resources required to extend the duration of their coupled BeComing.

Four Seasons through the Lens of Quadernity

In each of the four seasons, the Mother and Father dance together rhythmically, staggering their PTPRs so that their Pulls and Pushes align and their Transitions and Rests align. 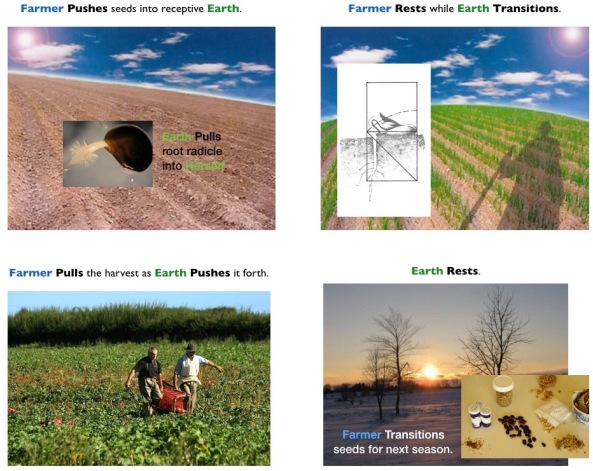 As we compare the four seasons, as shown in the photos above, with how they line up in our trusty Pragmatic Schematic below, we note that the two different relationships (as established in Divine Divisions) enjoyed by the Mother and Father are more apparent in the graphic than in the photos.

In the photos, the Female Pushes visibly ripe produce from the plants, to be harvested by the farmer (Male Pull).  In the spring photo, however, the processes are invisible.  The Female Pulls the Male‘s seed and secretly prepares it to grow and produce.  Ensconced in the warmth and darkness of the Mother, the seed is invisibly Transitioned into a productive plant.

Like the story of the seasons, delivering visible produce from invisible potentiality, the moon cycles from invisibility into visibility and back again.

The earth rotates on its axis, completing a cycle in ~24 hours.  During this rotation, part of the earth is bathed in sunlight while the rest is cloaked in darkness.  The sun does not rise and fall as it appears to do from our vantage point; instead, we rotate out of, and into, our own shadow.  The sun is ~93 million miles from earth whether our place on earth is temporarily facing toward the sun or away from it.

The moon’s cycle around earth takes ~28 days.  During this span of time, the moon is said to wax and wane, though it does neither.  The moon retains its size and shape throughout its cycles.

The moon rotates on its axis once in the same time it takes for it to revolve around Earth.  This means that always the same side of the moon faces Earth.

In showing the moon images, arrayed across the PS, its entire cycle appears in a linear advance, waxing from the beginning, reaching fullness in the center, waning toward the end, and then Resting until the next cycle begins.

The moon helps us recognize that just because something is unseen does not make it unreal; and the Pragmatic Schematic helps illustrate how dual systems (comprising Female and Male partners) sustain their dynamic activities and confluent processes.