Below is an image of an ecological feedback loop, showing the necessity of all four steps in the circle:

The flow chart below shows the cyclic ‘going-around-and-coming-around‘ in the mathematical form of an iterated algorithm.

We follow along the circuit to see that an input X is received/PULLed and processed/TRANSITIONed by a rule/algorithm applied to it, after which a result/output {f(x)} is exported/PUSHed into the Domain from which a subsequent input will seed another cycle, or iteration.

Before we had computers to perform algorithms, the alchemical illustration below effectively symbolized feedback in the form of an ouroborus:

The two animals in the second drawing below are giving us clues about the dual dimensions, or domains, in which they cooperate.  The creature with wings symbolizes the realm that is skyward/heavenly.  This is the dimension of metaphysical consciousness, our upper quadrants.   The one without wings must maneuver on the earthly plane of physical corporeality, our lower quadrants.

As a Lepidopteran metamorphoses, it illustrates this same above-below dynamic in a single life-span: a larva/caterpillar is an earth-bound, belly-crawling consumer who must endure pupation to become the adult butterfly/Imago who can then fly the heavens, drink nectar and have intercourse to propagate the species.

Let us follow the circularity of the dual expressions of inter-dependent creatures in the lifespan of a lepidopteran:

The two critters are balanced and stabilized together, as are our own embodiment and enmindedness.

Creation/OUTformation and INformation require and render each other.

A loop is formed.  The end takes us back to the beginning.

M. C. Escher cleverly represents yet another sort of double feedback loop.  He depicts three-dimensional hands, each one illustrating, in two-dimensions, its own forearm.

Entity/Systems are thought to operate in three-dimensions; however, their representational data may be fully preserved in two-dimensions.  Here are three additional examples of how the contiguous dimensions are related:

In both images below, the feedback between Mother and Father conjoins their dual dimensions/domains.

In the larger image to the left above, 2D surfaces are coiled together into 3D heads, representing the causal Subjects, Mother and Father, who are connected at both top and bottom (upper and lower quadrant relationships).

The couple is inextricably entwined.  Each partner is inversely related to the other.

The partners’ opposing forces are in counter-balance.

The Object of one gender is received by the Subject of the opposite gender:

Here we diagrammatically illustrate feedback relationships between the Male and Female partners, who perform functions that modify the input from each other into output for each other:

In their Private Nighttime Relationship (upper quadrants), the Creatable Female Subject Pulls/chooses a seed from the INformed-Creative domain of Patterns.  After Her gestational Transition the Informer–Mother PUSHes/emanates Informative energy that, if received/Pulled in the physical domain by the Male/Father/Observer, could consolidate into Created/OUTformed Matter.

In their Public Daytime Relationship (lower quadrants) the Informable Male Pulls/chooses what ‘matters’ to Him in that moment.  In Transition, what matters to Him psychically, matters for Him physically.  Thus, Father is Matter‘s Creator as well as its meaning-maker.  The Pattern that represents His selection/encounter is Pushed/emanated back into the upper domain, INforming it once again with Creative Patterns.

When many entities are involved, rather than simply a single compatible pair, feedback systems can get pretty complex.

Pull * Transition * Push * Rest is present throughout all feedback systems, regardless of how extensive or intricate they become. 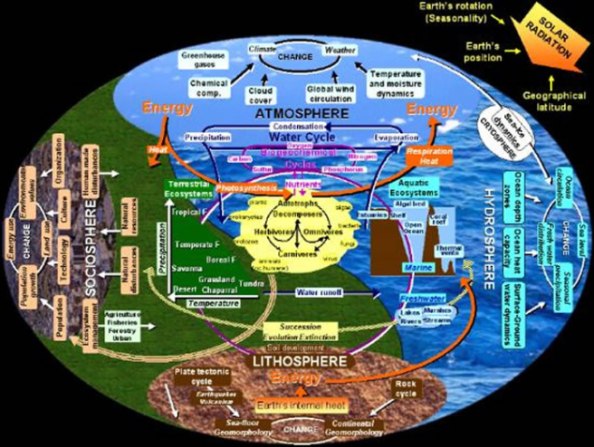 More about complex dynamical systems in an upcoming chapter entitled The Lattice.